On October 2-3, the conference “Towards an Environmental Ethic of ‘Fittingness’” took place; it was the first ILSE conference to be organized online. During this conference, we focused attention on the ancient and recently revived philosophical conception of ‘fittingness’ as an ethical-aesthetical idea; in particular, at our conference we sought to explore the way in which this idea – which uniquely combines theory and practice in its core meaning – is beneficial for environmental ethics.

We were stimulated in our reflection on ‘fittingness’ by keynote addresses from three speakers, each of them very well versed in environmental ethics. On Friday, October 2, the first keynote lecture was delivered by Prof. Dr. Michael S. Northcott, one of the foremost Christian environmental ethicists and currently guest professor at the ETF Leuven. His lecture was entitled “The Fittingness of Biodiversity to the Divinity of the Creation: Why the Conservation of Species is a Theological Moral Priority.” Using examples from Indonesia, where he currently lives, he argued for a stronger argument for the conservation of species that the usual appeal to their supposed ‘intrinsic value’. Rather, Northcott argued, we should conserve biodiversity because doing so is fitting to the capacity of the Earth to represent the complex relational perfection of divinity.

The second keynote address was also delivered on October 2, by Prof. Dr. Johan de Tavernier, Professor of Theological Ethics and Dean of the Faculty of Theology of the Catholic University of Leuven. His address was entitled “Fittingness and the Spiritual-religious Nature of Environmentalism.” Remarking that environmentalism harbors certain elements of religiosity, De Tavernier argued that a conscious articulation and structuring of such religious-like aspects within environmentalist thoughts can contribute to a better understanding of its core motivating beliefs and attitudes, benefitting the coherence and consistency of its message. 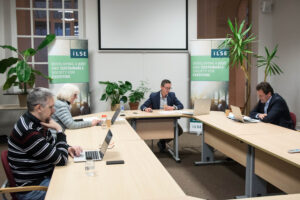 On Saturday, October 3, the conference resumed with the third keynote lecture, by Prof. Dr. Emily Brady, Professor of Philosophy at the Texas A&M University, and well-known for her contributions to environmental aesthetics. Her keynote lecture was entitled “Fittingness and Other-Regarding Attitudes in Environmental Aesthetics.” In her address, she explored three kinds of experiences which decenter the human subject and constitute other-regarding attitudes toward the environment: the sympathetic attention of aesthetic experience, the receptivity and curiosity of wonder, and the humbling effect of the sublime. In further describing these experiences, as well as the values and meanings they generate, she made the point that they assist in grasping and giving content to the concept of ‘fittingness’ as it relates to environmental thinking and practice.

In addition to these keynote lectures, thirteen papers were presented by a wide variety of participants, from different parts of the world. This conference was originally planned as an in-person event in May, but due to the Covid-19 crisis we had to reschedule it later on in the year, as an online event. Despite the additional hurdles of meeting online, the conference participants were very involved – each keynote and paper presentation gave rise to animated conversation and debate.

This conference is one of the activities in a broader research project, also entitled  “Towards an Environmental Ethic of ‘Fittingness’,”conducted by ILSE and generously financed by the Issachar Fund. This project also funds a 14-month on-campus stay of the ILSE researcher Leslie Herrmann, who is currently finishing her doctoral dissertation on ‘fittingness’.